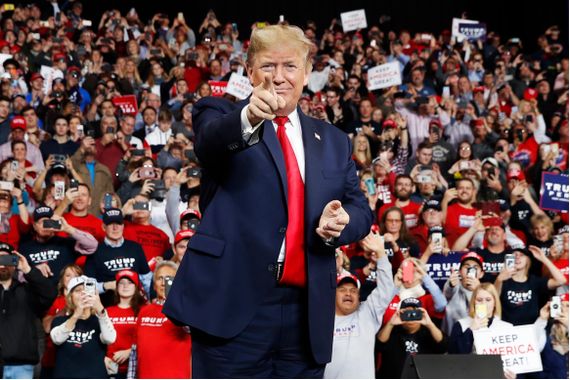 “The plain people of this country are inveterate and incurable hero worshippers,” Col. House explained. “They easily can be manipulated by a man with a slogan that expresses their ‘undefined aspirations.'”

We revisit the “Col. E.M. House Report”, (1919), a chilling 10-page document that oozes contempt for Americans and reveals the bankers’ “entire system of thought control” employed 100 years ago. These goals and methods have not changed. If ever we needed proof that democracy is a charade, this is it.

In 1919, the Rothschild-dominated Bank of England planned to trick the United States into becoming a “British” colony again by joining the League of Nations. The League of the Nations, like the “British Empire”, was the bankers’ fiefdom, and this stratagem would merely formalize a colonial status which already existed.

The bankers took over the U.S. during the Teddy Roosevelt Administration (1901-1909) when Rothschild front J.P. Morgan alone controlled 25% of American business.

The “Col. E.M. House Report”, is a chilling 10-page “progress report” dated June 10,1919 which proves the League of Nations was an aborted attempt at world government and a facade for banker tyranny. The Report reveals the reality and the tactics behind the United Nations and globalization.

House writes: “We have wrapped this plan in the peace treaty so that the world must accept from us the League or a continuance of the war. The League is in substance the Empire with America admitted on the same basis as our other colonies.”

The report oozes contempt for Americans and reveals the deceitful methods international finance employed almost 100 years ago to bring about world government. These goals and methods have not changed. If ever we needed proof of an elite conspiracy to subvert and enslave us, this is it. 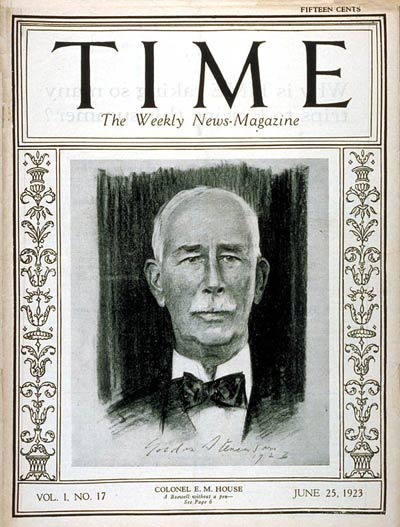 The author is Col. Edward Mandell House (1858-1938), the Rothschild agent who secretly directed U.S. affairs during the Woodrow Wilson administration. Col. House was known as Wilson’s friend and “alter ego.” (He had not served in the military and the term “Colonel” was merely honorary.) The report is addressed to British Prime Minister David Lloyd George, whose career was made as a lawyer for the World Zionist Organization.

The report details Col. House’s progress in preparing “for the peaceful return of the American colonies to the dominion of the Crown.”

“Crown” refers to the owners of the Bank of England. Their identities are an official secret. According to E.C. Knuth, the “international financial oligarchy uses the allegoric ‘Crown’ as its symbol of power and has its headquarter in the ancient city of London…the giant Bank of England, a privately owned institution… is not subject to regulation by the British parliament and is in effect a sovereign world power.” (The Empire of the City, p. 59)

Col. House continues: The “peaceful return of the American colonies” can only be brought about with “the consent of the dominant group of the controlling clans.” 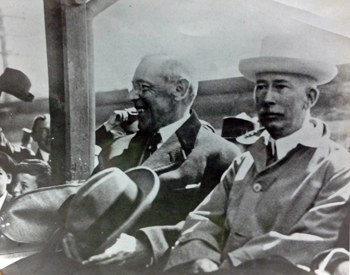 Col. House relates how these classes are being taught to accept “British” leadership. He details how the universities and press are staffed by “British-born” or Canadians.

“Through the Red Cross, the Scout movement, the YMCA, the church, and other humane, religious, and quasi religious organizations, we have created an atmosphere of international effort which strengthens the idea of unity of the English speaking world.”

The Overseas Clubs, service clubs, and war charities “enable us to pervade all sections and classes of the country.”

We “hold all American newspapers as isolated from the non-American world as if they had been in another planet instead of another hemisphere. The realization of this by the Associated Press and the other universal news gatherers, except Hearst, was most helpful in bringing only our point of view to the papers they served.”

He boasts that the United States “while still maintaining an outward show of independence” is identical with other colonies in its relationship to the Crown. “Has not President Wilson cancelled the big Navy program and dutifully conceded to us the command of the seas?”

He boasts that “the Anglo American alliance” has become “the unchallenged financiers of the world.”

He congratulates “our fiscal agents Messrs Pierpont Morgan & Company” for “putting this country into the war.” They exert “widespread influence on newspaper policy” through advertising and lent $200,000,000 to Japan to build a fleet to compete with America (making the U.S still more dependent on England.)

Col. House boasts that the “Crown” used money lent by the U.S. government for war purposes to buy up oil fields in California, Mexico and Latin America.

“The war has made us custodians of the greater part of the world’s raw materials… [We] now largely control the oil fields of the world and thereby the world’s transportation and industry.”

THE LEAGUE OF NATIONS RUSE

The pressing issue now is to “transfer its dangerous sovereignty from this colony to the custody of the Crown. We must, in short, now bring America within the Empire.”

The first step was Wilson’s plan for the League of Nations “which we prepared for him.”

“The plain people of this country are inveterate and incurable hero worshippers,” Col. House explains. They easily can be manipulated by a man with a slogan that expresses their “undefined aspirations.”

Afterwards, they will trust the sloganeer no matter what he does. Wilson has gained this trust and this accounts for “his exceptional usefulness to us.”

“Any abrupt change might startle the ignorant American masses and rouse them to action against it. And us. Our best policy therefore would be to appoint President Wilson the first president of the League… he will be able to satisfy [Americans] that far from surrendering their independence to the League, they are actually extending their sovereignty by it…”

Foreshadowing The Patriot Act, Col. House says Woodrow Wilson “alone can father an anti-Bolshevik act which judicially interpreted will enable appropriate punitive measures to be applied to any American who may be unwise enough to assert that America must once again declare her independence.”

Col. House goes into great detail about how Wilson must be massaged and manipulated. Many people think someone else wrote this Report but only Edward Mandell House knew Wilson this well.

For example he says Wilson “is easily slighted and remarkably vindictive.” The new British ambassador should be a “Wilson worshipper” and “a gentleman-in-waiting to the President.” He lists the gifts Wilson already has been given.

“OUR ENTIRE SYSTEM OF THOUGHT CONTROL” IS AT WORK

Col. House suggests staging the first session of the League of Nations in Washington.

“This will convince these simple people that they are the League and its power resides in them.”

He recommends a “series of spectacles by which the mob may be diverted from any attempt to think too much of matters beyond their province.”

“While awaiting these diversions for the vulgar, we are incessantly instructing them in the wonders of the league. Its praises are thundered by our press, decreed by our college presidents, and professed by our professors. Our authors, writers and lecturers are analysing its selected virtues… we have enlisted 8000 propagandists for the League. We have organized international and national synods, committees, conferences, convocations, conventions, councils…to herald the birth of the League as the dawn of universal peace.”

“Agriculturalists, bankers, brokers, accountants, chemists, and all other functional groups capable of exerting organized professional, business, financial or social pressure are meeting to endorse the League in the name of peace, progress and prosperity…Our film concerns are preparing an epoch-making picture…”

“In short, our entire system of thought control is working ceaselessly, tirelessly, ruthlessly, to ensure the adoption of the League. And it will be adopted, for business wants peace, the righteous cannot resist a covenant, and the politicians, after shadow boxing for patronage purposes, will yield valiantly lest the fate of the wanton and wilful pursue them.”

Thanks to the valiant opposition of Republican Senators, the United States rejected the Peace Treaty and with it the League of Nations Nov. 19,1919. The plot was temporarily foiled.

But the secretive bankers’ covert campaign to impose world tyranny has not abated. They financed Hitler and engineered World War Two. The League of Nations was resurrected as the United Nations in 1945 and the “Cold War” initiated. Many believe we are in the early stages of “World War Three.”

All segments of society continue to be propagandized with the virtues of the UN. National institutions are subverted. The press and education continue to be controlled. Politicians are figureheads.

Some of the tactics have changed. The American empire has replaced the British Empire as their instrument of world hegemony. But Americans should not think they are serving their own interests. They are building a ‘new world order’ and its master is “the Crown.” In Col. House’s words, Americans will be colonists who have to “petition at the foot of the throne.”

The references to control of oilfields suggest that oil is first and foremost an instrument of world domination. The final stage of world tyranny involves gaining complete control of Middle Eastern oil. This portends an invasion of Iran.

The threat can no longer be characterized as strictly “Jewish.” Through Freemasonry, the Rothschilds have received a degree of collaboration from the world’s financial, cultural and political elites as to render this point moot.

Lemming-like, Western elites have embraced a death-wish for civilization.