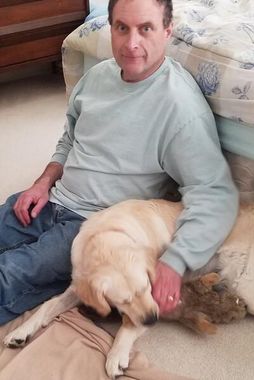 Mike Granata, 56, made the fatal mistake of trusting his doctor.

“At the insistence of my doctor, I gave in to pressure to get vaccinated.
On August 17th, I received the Moderna vaccine and starting feeling ill three days later. I never recovered but continued to get worse. I developed multi-system inflammation and multi-system failure
that medical professionals could not stop. My muscles disappeared as if to disintegrate”
This innocent mistake could be your last.
These days, most doctors don’t save lives; they take them.  Their role is to hook you on drugs, maim or kill you, and make money doing it. Why aren’t they liable?

Michael, a longtime resident of Gilroy CA, passed away on November 1, 2021.  Never a kinder more gentle man did I know than my husband, Michael.

For those who knew Mike, you know that he was a good and honest man.  He was kind, considerate, and always polite.

Mike was adamant that people know what happened to him that caused his early and unexpected death.  Message from Mike: “Many nurses and non-nursing staff begged me and my wife to get the truth out to the public about the Covid-19 vaccines because the truth of deaths from the vaccine was being hidden within the medical profession. I promised I would get the message out.

So, here is my message: I was afraid of getting the vaccine for fear that I might die. At the insistence of my doctor, I gave in to pressure to get vaccinated.  On August 17th I received the Moderna vaccine and starting feeling ill three days later. I never recovered but continued to get worse. I developed multisystem inflammation and multisystem failure that medical professionals could not stop. My muscles disappeared as if to disintegrate. I was in ICU for several weeks and stabbed with needles up to 24 times a day for those several weeks, while also receiving 6 or 7 IVs at the same time (continuously). It was constant torture that I cannot describe. I was no longer treated as a human with feelings and a life. I was nothing more than a covid vaccine human guinea pig and the doctors excited to participate in my fascinating progression unto death. If you want to know more, please ask my wife.  I wished I would have never gotten vaccinated. If you are not vaccinated, don’t do it unless you are ready to suffer and die.”

Mike did not deserve the pain and suffering he endured.  He was a good man and deserved better.

Mike was born in San Jose, California and moved to Gilroy at age one, where he resided for the last 55 years.

Mike was an intelligent man but never flaunted it.  Mike chose to clothe himself in humility, kindness and gentleness every day, and preferred to work quietly behind the scenes doing good deeds and expecting nothing in return.

Michael could be seen twice daily walking his Golden Retriever around the neighborhood or up at Gavilan College for the last 20+ years in his jeans, t-shirt and hat.

Michael was proud to be a gear-head, a true car restoration enthusiast and tinkerer.

Mike loved spending time with his wife, his dog, his cars and playing the drums as he was quite a gifted musician.

Michael was preceded in death by his brothers Anthony Edward Granata and Salvatore Anthony Granata.

Thanks Kat!
—Related – I’m a Doctor and I fear We Will Never Regain the Public’s Trust After Covid
———– White Coats/Black Arts–Doctors have gone completely rogue.

“Let thy food be thy medicine and let thy medicine be thy food” was the original Hippocratic oath HOWEVER it was changed in 1964 to accommodate the children of the devil and their lust for murder (John 8:44).  Hospitals are temples dedicated to devils and demons with doctors and nurses as high priests;  Judgment awaits them in this life (when CNN flips the script and instead tells people the truth about the lethal bio-weapon gene altering vaccine which is part of the plan to bring about “order out of chaos”) and in the life to come when they are judged by their Creator.

Evil History of Modern Medicine, it’s insignia (symbol), intent and what it’s about ?

Secret Truth Behind Medical Insignia
Tony B wrote-
Almost everyone I know or meet, if the conversation turns to health, will sooner or later mention “my doctor,” as this man mentioned.   Every time I ask why they need their own doctor.  Even if there is an answer, it is always prefaced with the blank stare look, plus always, an incredulous, “You don’t have a doctor?”  My reply to that is always along the line: “If you are healthy, what do you need with a doctor?” Few answer that.  Oh, the regular check up is mostly the given reason.  Which begs the same question over again and is simply the propaganda line to get you on some sort of drug which will make you sick eventually so that their profit trail has a beginning and ends only with your death.  Usually when I ask people if they ever leave “their doctor’s” office without some prescription, they clam up.  You can see the wheels beginning to turn by their facial expressions.  They don’t want to talk about it anymore.

The blatant propaganda of the insurance extortion racket is a big influence in this most expensive con in our world also.

I used to tell people “I march to a different drummer” with my independent thinking, but I eventually realized I don’t march at all.  Never in my life did I understand “peer pressure.”  What’s the pressure?  At one time I assumed that everyone did his own thinking and deciding.  Which made me forever immune to the phony cry for toleration and/or joining of every sort of directed crowd “think.”  Who does the thinking in these agendas other than their promoters?

A bit late but I do now realize that all of us must “march” to God’s easy rules or we’ll end up just as the whole world is today.  God’s love makes a whole lot more sense than Satan’s hate, which is truly what our life choices are all about.