The stylized art in this poster genuflects to Soviet era and Chinese Communist propaganda. Mask wearing is associated with industrial garb worn during yesteryear’s four-year economic plans from central committees. Note the confident hands-on-hips stance and that the woman holds the entire globe in her left hand, like a basketball. Perhaps world domination is what we will succeed in here.

Covid propaganda posters repeat motifs from the Soviet era suggesting that the usual suspects are behind this the latest attempt to enslave and destroy humanity.
“We must inoculate ourselves against these mind viruses as much as any contagion, whether real or imaginary.”

Guy Crittenden is a freelance writer and author of the award-winning book The Year of Drinking Magic: Twelve Ceremonies with the Vine of Souls (Apocryphile Press, San Francisco). Follow Guy at HipGnosis.co

PROPAGANDA: In the Fourth Industrial Revolution
See this link for all the examples.by Guy Crittenden
(henrymakow.com)

As I suggested in previous articles such as “With No Shot Fired: Medical Tyranny and the Rise of the Fourth Reich,” totalitarianism returned to the world in 2020 in a way not seen since the rise of the Iron Curtain in Cold War Europe.
No nation is safe: 179 countries have signed on to top-down plans from the Davos crowd, the World Economic Forum (WEF), the UN and an alphabet soup of agencies and NGOs including the WHO, CDC, IMF to impose a technocracy or AI-controlled management system on human society, in place of nation states.
This will see small businesses, traditional schools, local doctors, family farms — and even private property and common law rights — replaced with a Black Mirror society in which digital screens will be ubiquitous, along with lab-grown meat and GMOs, sensors, facial recognition cameras, social credit scores, monitoring systems, vaccine passports and digital ID’s, satellites, human capital bond programs, and so on. Implants and brain-machine interfaces could even lead us into a transhumanist (read: eugenicist) future that may challenge the very notion of what is human.

For more than a year, people have lit up social media with memes and links to articles and videos about the current lockdowns, masks, and social distancing, and the coming Orwellian dystopia; it’s overdue that we deconstruct the visual dimension of the propaganda. The current globalist takeover and restructuring of the world economy has a specific look or aesthetic to it; we must dismantle its spellbinding power through critical awareness.
As we will see from a few examples, the look of tyranny plays a crucial role in manufacturing our consent.
Examples 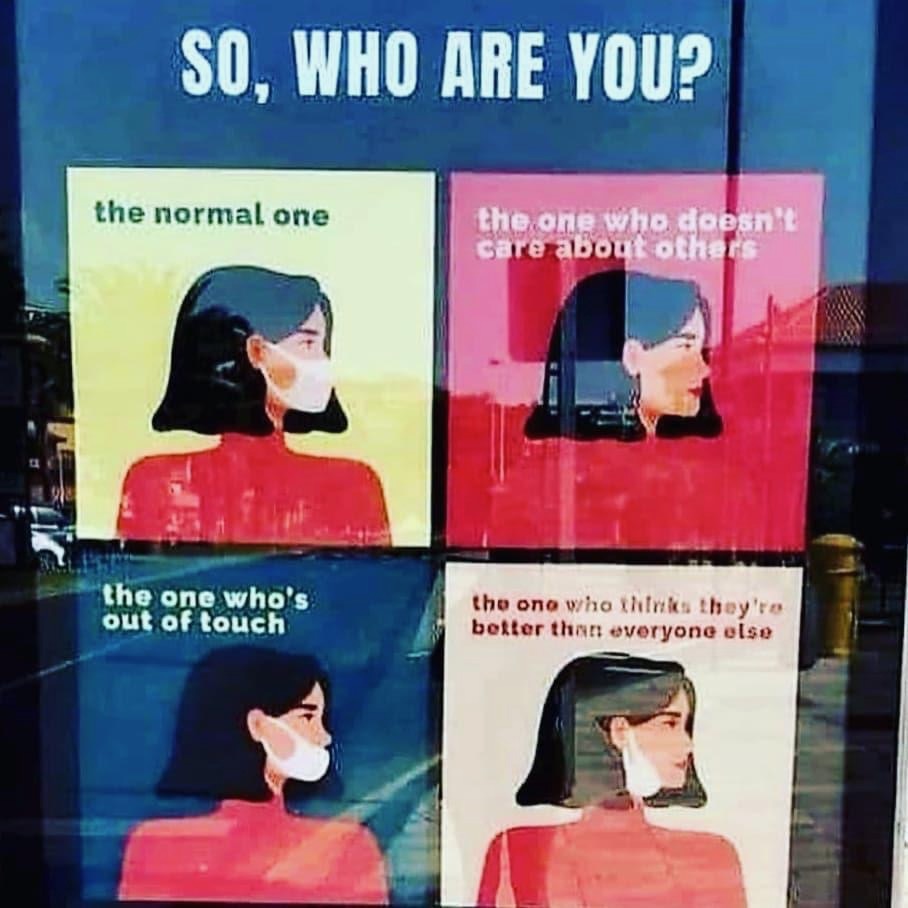 1. This bus shelter poster has appeared in local languages in many countries, including the UK and Spain. The cartoon-like rendering of the woman is typical of what we could call the “Davos” poster style, featuring areas of flat solid colour, stylized facial features, a woman of indeterminate ethnicity, and text that encourages social ostracization of anyone who doesn’t follow orders. Statements such as the one in the bottom right panel, that she “thinks she’s better than everyone else,” could even incite violence.

2. The Davos style is used globally by such agencies as the World Health Organization (WHO) and the US Center for Disease Control (CDC). The portrait icons capture different ages, genders and ethnicities, but notice how no one has a face. Humanity is being infantilized and anonymized, and led into a gamified, tokenized economy in which people will have “digital twins.” The soft pastel colours distract us from the implementation of a two-tier society. The text about “protecting others” encourages virtue signalling and shaming of those who refuse or cannot wear masks or whose agitation for rights and freedoms is “selfish.” Issues are sidestepped about masks not preventing disease, and that they actually harm the wearer.

3. Another example of the “Davos” style, again with featureless faces and in this case an oxygen deprived mother breastfeeding her baby. Her brown skin suggests racial inclusivity and a cosmopolitan world, but notice the subtle message that mask wearing is as natural as breastfeeding. This is all about normalization. Note that even people who’ve taken two injections have been kept from their newborn children, as they can still transmit COVID-19 (we’re told). Quite a different reality from this poster.
4. (above) 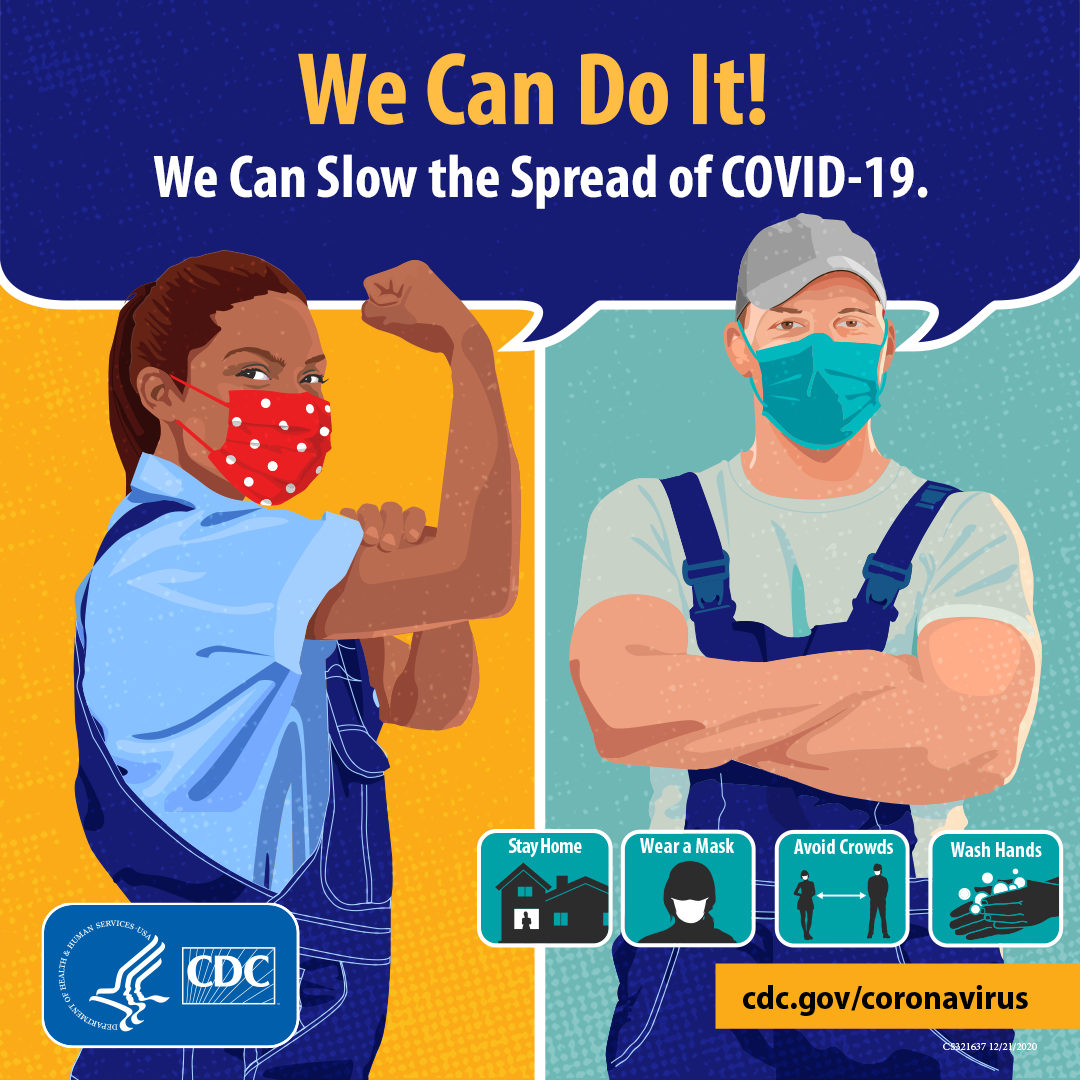 5. This poster is a riff on the vintage Rosie the Riveter iconography of World War II fame, in this case showing both a female and a male worker flexing their biceps and recalling the “can do” attitude of previous war efforts in which women (especially) worked in factories building planes and tanks while the men fought overseas. This subconsciously associates taking the injections and compliance with government health edicts with heroism, strength & community service, and distracts the public from the risks of what are untested, unapproved & dangerous experimental gene therapies, where even children as young as 12 are being encouraged to take with free ice cream.
6. No look at the globalist propaganda would be complete without that little blonde girl in pigtails — a trope from 1930s fascist movements — one that’s exploited in what Canadian environmental activist Cory Morningstar calls the “manufacturing of Greta Thunberg.” The young girl’s fresh-faced innocence extols hope for the future in addition to racial purity. The eugenicists currently deploying a dangerous spike protein technology by way of syringes are using Thunberg’s persona as the “voice of the young” to promote a climate change ideology that will be used to justify further lockdowns and assaults on civil liberties (despite that the earth is actually cooling as we enter a Grand Solar Minimum), and ultimately depopulation of the planet.
7. The now-infamous WEF image of a young man celebrating life in a New World Order future. His tousled hair and beard rock that international ethnic vibe, though he’s sufficiently pale to remain ambiguous. He looks like he could hail from the Gaza Strip — the globalist model for the whole planet — where people own nothing, but most certainly aren’t happy.